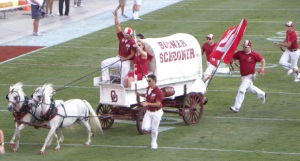 Benny Joe Pontious, 59, of Ponca City, Oklahoma, beloved husband, Son, father, Papa and Brother passed away on January 13, 2022.  Benny was born into the world on February 11, 1963, in Pawhuska, Oklahoma to Billy Joe and Linda Murray Pontious.   Benny attended school in Shidler, Oklahoma till 1977 when the family moved to Lincolnville, Kansas where he attended and graduated from the Centre High in Lost springs, Kansas in 1980.  After graduation Benny worked various jobs. He often worked helping his dad pumping wells. In 1983 he started working at KDOT.  He also was a Marion City Police Officer part time while still working at KDOT, and during this time he became the father of three children, Alycia, Ethan, and Taylor. Benny retired from the KDOT after 20 years of service and moved to Oklahoma and went to work for Kay County as a detention officer.  He later had the opportunity to work for Southwind Casino where he worked in several different departments maintaining employment with the Kaw Nation for 18 years, earning his position as management.

In 2017 Benny met the love of his life, Becky Ferguson, and they were happily married on June 13, 2020, they continued to make their home in Ponca City, with his bonus children Bryan, Mitchell, Gavin, Aiden, and Gracie.  Benny never used the term stepchildren, he stated “We were the Brady Bunch plus two.” He made a huge impact on his family and his work family. Everyone was Benny’s Friend. He will be deeply missed by everyone who encountered him.  Benny had a contagious smile that would brighten the room.  Don’t be fooled by that sweet smile, as the moment you blinked that innocent charade went down and you could catch him throwing down dance moves while walking past the cage at work or singing songs with the kids in the car.  Gracie loved to catch him on video and use it for black mail later.  He had a knack for scaring the crap out of people.  Benny was the very definition of onery.  Underneath that playful spirit of his lay a heart of gold, covered in crimson and cream.  Benny was an avid OU fan, through and through.   If you wanted to get him fired up, talking about his team was the fastest way to do that.   But as much as he loved his team, having fun, and playful torment he loved his family more.  He also enjoyed woodworking, family cookouts, and spoiling his grandkids.

Left behind to cherish his memory are his wife, Becky Pontious, Gavin and Aiden Blakey and Gracie Ferguson of the home; Alycia Turner and husband Timothy, of Hamilton, KS; Ethan Pontious and wife Rebecca, of Newkirk, Ok; Taylor Pontious of Marion, KS; Bryan Penka and Haley of Blackwell, OK; Mitchell Penka and Chancie of Shidler, OK; Seven grandchildren; Bentley, Thomas, Maverick, Lillian, Grayson, Oakland, and Elena, and one on the way; his mother Linda Lou Pontious; two brothers Charles Pontious and wife Lavon, and Trey Pontious and wife Sandy, all of McPherson, KS, as well as numerous nieces and nephews, and countless friends.

Funeral services, under the care of Grace Memorial Chapel, will be held at 10:00 A.M. on Wednesday, January 19, 2022, in the J.R. McCauley Gymnasium in Newkirk, Oklahoma with burial to follow in the Washunga Cemetery.  Condolences may be left for the family online at www.gracememeorialchapel.net

To send flowers to the family or plant a tree in memory of Benny Joe Pontious, please visit our floral store.